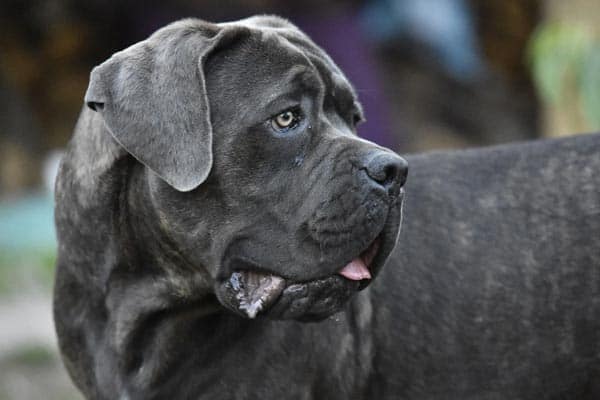 Cane Corsos are a well-beloved breed among those who enjoy big dogs. However, these dogs, also known as Italian Mastiffs, have a somewhat formidable appearance. It is very reasonable to wonder whether these dogs are safe to have around.

Corsos can be aggressive or dangerous if they are not properly socialized. A Cane Corso that has been adequately trained and socialized around people will be protective but gentle with its family.

This video helps demonstrate how much of a take-charge attitude Cane Corsos may have with other dogs. Read on to learn more about whether you need to worry about Italian Mastiff aggression.

Why Does Cane Corsos Have an Aggressive Reputation?

Pupvine describes Corsos as having an intimidating appearance. The breed is huge and has the muscular build that comes along with its size.

One of the things that immediately stands out about this dog is how watchful they are for threats.

The size that these dogs are makes them something that few people want to cross. Cane Corsos that don’t know if you’re safe will observe you.

These dogs come from the same bloodlines as members of the Mastiff family. Two other names that these dogs are known as include Molossers and Molossus. Kennel clubs regard these dogs as being a type of canine bodyguard, an area where they excel.

Loyalty to their families and versatility are two of the Italian Mastiff’s most beloved traits. However, these dogs require a balance between being allowed to be protectors and having the potential for conflict with people or animals kept in check.

In ancient times, Mastiffs had a reputation for being war dogs. Such dogs were fearless, taking on the enemy without any hesitation. However, a downside is that this reputation has persisted in modern times in negative ways.

One of the ways this bad reputation has damaged the breed is that they are not welcome in all areas. Municipalities, states, and countries have taken steps to restrict the breed because of bite cases. In some regions, there are strict ownership requirements.

Cane Corsos are territorial and will work hard to guard anywhere their families are. Their family’s home, car, and even family members themselves are something that these dogs will protect. This behavior can lead to the conflict under the wrong circumstances.

Training is essential from an early age so that Corsos know how to relate to people properly. Dogs that get used to being needlessly reactionary from an early age will have problems into adulthood. Owners should rein this behavior early.

Socialization makes all the difference, and without it, one of these dogs will act out towards strangers that it encounters on walks. Dogs who were never properly socialized as puppies are more likely to get involved in biting incidents.

Some of the incidents that involve Cane Corsos biting include unfamiliar children teasing them or other harassing behavior. These incidents often generate a lot of negative publicity and may have tragic consequences for the dog.

Does Cane Corsos Have a History of Being Protectors?

According to Pet Educate, Italian Mastiffs date back to the time of the Roman Empire. Their guarding history ranges from guarding livestock to protecting family homes.

One of the advantages that have come with these dogs having such a long history is their versatility. The region that became Italy has seen a lot of changes in its long history. With the changes to Italian society, the breed’s role has evolved.

The dogs that became Cane Corsos had been used as Roman war dogs. These dogs were on the front lines as the Roman armies took over new territories. Because the dogs needed to take down enemy troops quickly, the Romans bred them as large, powerful dogs.

When Italy became more industrialized, the dog’s demand began to slow. Breeding efforts in the 1970s helped to revive this breed. Today, the dog has a strong reputation as a guardian, which has increased its demand in working circles.

Although a somewhat rare breed in policing, Italian Mastiffs have traits that make them an excellent choice for police work. Security firms that use these dogs find them very helpful for patrolling.

Farms, vineyards, and ranches in areas with predators like coyotes or mountain lions will find this dog a helpful addition. If there are any livestock present, these dogs will put a lot of effort into protecting these animals.

In addition to guarding activities, these dogs are ideal for herding activities like cattle driving. Most Cane Corsos are calm around cattle and horses, which makes them well-suited to this work.

Their natural watchfulness makes these dogs perfect as family pets who can easily guard the household. In many cases, the dog will notice and alert the family before anyone else in the house is aware of any problems.

Although superior property guardians, most familiar with the breed would discourage owners from keeping these dogs outside all the time. Corsos must have regular daily interaction with their families to avoid problems.

How Does Cane Corso Aggressiveness Change with Age?

Your Purebred Puppy notes that Cane Corsos calm down somewhat as adults. Aggressive behavior will be more common among puppies and young dogs.

Although aggression can occur at any age in an unsocialized dog, younger dogs are more likely to be at their worst before reaching full adulthood. However, aggression is not something that a dog will grow out of without guidance.

An Italian Mastiff is inclined to treat people it encounters as a threat until proven otherwise. The more these dogs interact with a diverse group of people as puppies and young dogs, the better their overall socialization.

The early socialization process will need to include other animals, so these dogs understand what is and is not acceptable. Other dogs of the same sex and cats are often of particular concern. Owners may need to consider using a trainer if necessary.

Cane Corsos think very independently, a trait that may cause difficulties in youth. In many cases, these dogs will try to exercise dominance over their owners. A young dog will need to understand that its owner is the boss from an early age.

Large Molosser breeds often attract the wrong type of attention, even if the dog has done nothing wrong. With many locations having restrictions against such dogs, some people think the worst of these breeds. Good canine citizenship is essential.

Allowing your dog to meet new people is the start of having a Vorso that adapts well. Obedience training can go a long way with these dogs. An advantage of training is that these classes allow your dog to interact with new dogs and people.

One of the most important things to remember is to keep all training sessions positive. Because of their tight bond with family members, these dogs are sensitive to real or perceived displeasure. Avoid harsh training methods that encourage aggression.

What Are Some Cane Corso Traits You May Need to Work On?

According to Russian Dog, much of how Cane Corsos turn out has to do with owner influence. Owners need to know when their dog needs more training.

One example is when new children are in the home or your children bring friends over to visit. A dog will not distinguish between a stranger who is a child or who is an adult. These dogs need to get used to new faces regularly.

Maintaining control over your Italian Mastiff at all times is essential, on or off-leash. Your dog may require some extra lessons before it’s ready to go on walks or visit the dog park. If visiting dog parks, your pet needs good recall skills.

Owners need to make sure their dogs, regardless of their size, realize who is in charge. When a dog is the size of a Cane Corso, it needs to understand that it is not allowed to dominate everyone. There are ways to accomplish this task easily.

When a dog owner needs to assert authority, they need to avoid babying the dog and acting harsh or dictatorial. Positive reinforcement methods that use treats or praise can effectively show a dog that its owner is in charge.

One of the most important things that a Corso owner needs to know is getting a trainer’s help. Using a dog training professional before things get out of hand can be helpful for a dog and its owner and safer for everyone involved.

If a dog continually disobeys commands, has a reactionary attitude toward other people or animals, or shows signs of aggression, seeking help is a good idea. Without intervention, your dog could end up in dire circumstances.

When you seek a trainer, you will want to consider one who has experience dealing with aggression issues. If possible, you may want to find someone who has worked with Cane Corsos before. Large dog experience helps in any case, regardless.

There are different options that you can use for specialized training. A trainer who works with your dog one-on-one might work with your dog at your house. Another option that you may be able to consider is having your dog boarded for training.

Is the Cane Corso Safe Around Your Family?

World Dog Finder considers whether Cane Corsos are safe around families an important question. These dogs do well with socialization and training, but what about kids and pets?

One of the things that makes these dogs suitable for family settings is their protectiveness toward children. However, if you have younger children, they should be discouraged from running or shouting when around these dogs.

The problem associated with young children running and screaming around these dogs is that this behavior triggers the dog’s prey instincts. A child could end up getting injured if the dog jumps on and bites them.

Your kids need to learn how to play with the dog without causing problems. Once the kids and dog become acclimated to each other, playtime will be a lot more fun all around. Play with dogs this size should always be supervised.

Whether you have younger or older children, these dogs are very watchful when kids are at play. Don’t be surprised if the dog is first to know if someone gets hurt during play. Your dog will stay alert to any signs of trouble.

If your kids play activities take them outside the yard, you shouldn’t be surprised if the dog follows them. However, allowing a dog this size to roam loose may not be wise. Some people feel threatened because of the dog’s size and act accordingly.

Older children and teens may enjoy walking an Italian Mastiff. The dog will need excellent leash manners, and kids will need to walk the dog properly. One of the best ways to control these dogs is to use a tactical harness with a slip leash.

Cane Corsos often get along better with other dogs than their owners expect. Most of the difficulty with other dogs stems from having another large dog or one of the same gender. Smaller dogs of the opposite sex often do well with these giant dogs.

These dogs may or may not get along with cats. If one of these dogs grows up in a house with a cat, they will usually get along well. However, random cats that wander through your yard might end up getting chased.

Corsos will need a chance to get acclimated to new pets, regardless of their size. Once one of these dogs has accepted the new pet, a Cane Corso will accept it as a pack member to protect.

Cane Corsos are not aggressive or dangerous dogs if appropriately trained. When socialized from an early age, these dogs are excellent family protectors.