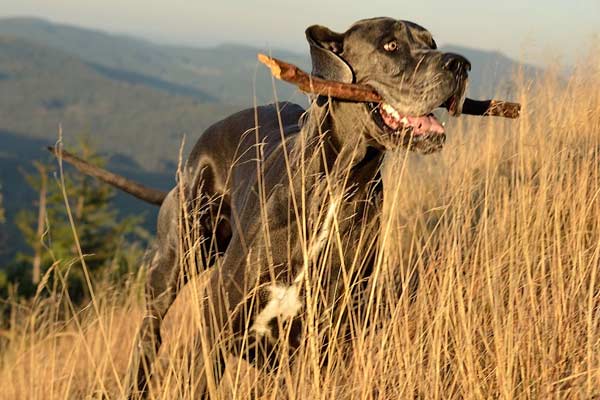 There are many breeds of dogs and they all have different qualities that define them. While Great Danes are not at the top of the list for intelligence, they are definitely not the dumbest dogs! There are some traits including obedience, adaptation, and instinct that help to hone in on how intelligent a Great Dane actually is.

When measuring how smart a Great Dane is using specified criteria, it is determined that they have average intelligence.

They do show more intelligence when it comes to adaptation and this could contribute to their skills of being good watchdogs. Instinctual and working intelligence is average for the Great Dane.

Because the Great Dane has higher adaptive intelligence than some other dogs, they are good at problem-solving. This helps them to determine what is and isn’t a threat when they are guarding a home.

Many people seek the Great Danes for their natural ability as a watchdog. They’ll make you feel relatively safe while you’re at home and while walking on city streets and just around suburban neighborhoods.

Great Danes respond well to training and they are clearly intelligent sensitive dogs.

Additional findings have shown Great Danes can remember hand gestures and up to 250 commands. Their history of being great guard dogs and bred for hunting purposes likely contributes to this breed’s intelligence.

This is a pet that will be adaptable and learn a great deal, as long as you are patient with them.

Each individual dog, regardless of breed, may show signs of being more intelligent in one area than another.

However, there have been studies on canine intelligence and general ratings given to the breeds. Dr. Stanley Coren has studied dog breeds and was able to create a system to gauge intellect.

Dr. Stanley Coren is considered to be an expert in studying how humans and dogs interact.

According to Dr. Coren’s extensive work in studying canine intelligence, the Great Dane is ranked 88 on a list of 208 breeds of dogs.

There are factors that may affect the intelligence of a particular dog, but the findings of Dr. Coren give a good basis for how intelligent Great Danes are.

Though the Great Dane receives a fair score according to some research, other factors such as how they are trained at an early age and how well they are socialized will definitely contribute to intelligence.

Ratings and scores are given to get a good idea of the base intelligence of the Great Danes. You can look over the results from these studies if you’re curious about the baseline level of intelligence for your pet.

There are 3 kinds of intelligence generally accepted as categories to measure canine intelligence. Adaptive, instinctive, and working or obedience intelligence gauge the intellect of a particular breed.

Adaptive Intelligence – This aspect of intelligence is based on a dog’s ability to learn how to react correctly in different situations. It also refers to socialization skills such as interacting with strangers and other animals. An example of adaptive intelligence is the problem-solving ability to identify threats from friendly people.

Instinctive Intelligence – Your Great Dane may have more pronounced instincts in particular areas that become apparent as they develop. Instinctive Intelligence is the dog’s natural drive for guarding, herding, retrieving, or other latent skills. This type of intelligence can be aided with dedicated training. It’s important to start early and get the assistance of a professional, such as a training school for dogs.

Working Intelligence – Obedience, or working intelligence, is how well your dog performs in certain roles like a service animal or tasks that require greater degrees of agility. Dogs that can learn quickly and exhibit positive growth in this area of intelligence often excel at herding and other working positions. Great Danes are about average when it comes to working intelligence, but they can be trained for improved performance.

Socializing your dog is a crucial step in making sure they behave and play well with other dogs and people. Without proper socialization, dogs can have problems like anxiety, aggression, and fear of certain situations.

It is important to make sure they develop good social skills early on so they are obedient and confident as adults.

As long as you begin this type of training when your dog is young, there’s a much better chance of success when it comes to how they are with humans and other dogs.

Great Danes are naturally friendly and sociable so it is easy to develop good habits as long as training starts early.

Socialization also affects intelligence in positive ways when your dog gets the correct amount of interaction with the world around them. They’ll be happier and healthier overall when you do so.

Compared to Other Breeds

Great Danes are considered average in intelligence when compared to other breeds. This does not mean they are dumb by any means.

Many owners comment on how attentive and bright their Great Danes are. This more refers to the fact that these dogs are not going to be performing in any official competitions or able to solve complex puzzles, for the most part.

The Great Dane is bred from Mastiffs and was a popular dog for hunting as well as excelling as a watchdog.

Nobility and those with large estates enjoyed the regal and “Great” size of these dogs for protecting their properties. While other dogs may have more smarts than the Great Dane, the popularity of the breed is not affected by the fact that they are only considered to be average in intelligence levels.

Some other breeds of dogs like the Border Collie have been noted as being quite intelligent in all 3 areas of adaptation, instinct, and obedience. Guard dogs like German Shepherds are also another highly intelligent breed.

Great Danes have shown good levels of intelligence in the hunting and guarding skills for which they were bred.

There are some dog breeds that are considered to be less intelligent than most other dogs. They include Bulldogs, Cocker Spaniels, Basset Hounds, and Dachshunds.

It has been noted that these and some other breeds tend to show traits of stubbornness, short attention spans, and laziness.

The Importance of Training and Stimulation

Puzzle feeders are good tools that drop small amounts of food after a dog figures out how to solve the puzzle. This makes for an excellent activity your pet is sure to want to do on a repeat basis.

Another aspect that affects Great Dane’s intelligence is how they are trained. Using positive reinforcement for displays of good behavior will help your dog learn and remember commands.

Introducing your Great Dane to other dogs or new environments is a great way to keep their brains stimulated and starting training at the earliest age will result in the most success.

Great Danes are large dogs, so it is critical for the safety of everyone around that the owner can handle them. Proper training will give both the owner and the Great Dane confidence. This will help reduce anxiety and promote mental wellness for the Great Dane.

They enjoy pleasing their owners and will go above and beyond to do so. You’re in for a lifetime of fun, excitement, and happiness when you have a Great Dane dog for a pet. Are Great Danes Good Swimmers? Everything You Need to Know