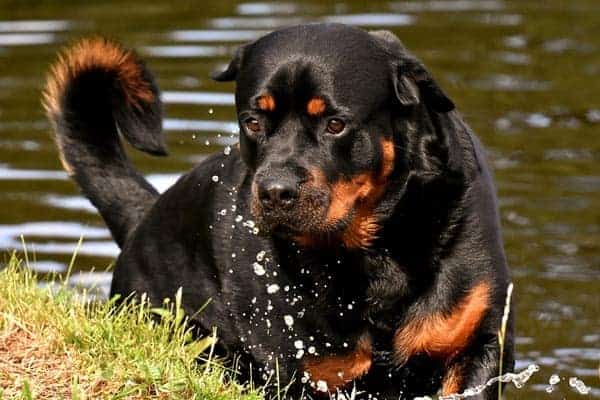 We tend to think of Rottweilers as large, powerful guard dogs, better suited to life on land than in the water. But does this mean that Rottweilers can’t swim at all and if they were to fall into the water, would they drown?

Rottweilers are in fact capable of swimming short distances with little trouble at all. They’re very heavy dogs and aren’t natural swimmers but if you take the time, you can teach your Rottweiler to enjoy swimming as a regular part of their exercise routine.

Most dogs adore water, and Rottweilers are no different. But they often prefer to splash around in shallow rivers and at the edges of the sea, as opposed to a Labrador, who’ll most likely dive in headfirst without caring how deep a body of water is.

It’s All in the Genes

The best way to get a good idea as to whether a dog will be good at swimming is to think about what it was bred for in the first place.

As the American Kennel Club (AKC) puts it, “if you think about a breed’s traditional purpose, it becomes obvious that some will be drawn to the water.”

Labradors were designed to fetch ducks that had been hunted by their owners, and this would include swimming in lakes and ponds to fetch them. But the Rottweiler, bred for herding and guarding, has had little experience with water over the years.

Should I Keep My Rottweiler Away from the Water Altogether?

Splashing around in water is a dog’s favorite pastime and having them play around in the surf or a shallow, slow-moving river can be a great way for a Rottweiler to exercise.

It’s not only good for Rottweilers to be exercised near water, but also important for them to be introduced to it as soon as possible.

As a puppy, a Rottweiler should be exposed to water early so that they know what it is and feel comfortable around it. The older they are for their first exposure, the more likely they are to fear it.

That doesn’t mean throwing them into the water and hoping they’ll just get the hang of it, of course. For your Rottweiler to really be safe around water, it’s best to teach them how to swim.

Teaching Your Rottweiler to Swim

Because Rottweilers aren’t natural swimmers, you might find that when you first take them to the lake or the sea, they’re not inclined to go in. They might splash around a little, but they may pull away from the water altogether.

First, they must love the water and see it as a fun part of exercise and play. Even if you don’t have access to a lake or beach, there are still lots of ways to start your dog off with seeing water as a fun, positive activity.

A kiddie pool is a perfect way to introduce your dog to water without taking them to the beach or the lake. They’ll associate water with playing, and not with fear.

By splashing around with your Rottweiler pup, you can have plenty of fun and exercise in your own backyard, even before they’ve had all their inoculations if they’re not encountering other dogs.

Use a Life Jacket

According to PetMD, Rottweilers are heavy dogs and even though their natural swimming instincts will surely kick in if they’re in the water, they use a lot of energy to stay afloat. To give them a hand, get them a life jacket.

The jacket should fit securely, but not so tightly that your Rottweiler can’t move in the water.

Remember that all dogs should be wearing a life jacket if they’re out on open water, such as a large lake or the sea.

Even the most adept swimmers will tire eventually, and dogs don’t know to turn and float on their backs when they’re exhausted!

Slow and Shallow Wins the Race!

There should be no rush in the exercise of teaching your Rottweiler to swim. Swimming isn’t something that comes naturally to them, so if you’re looking for a dog who’ll be a regular swimming companion, you might want to look elsewhere than a Rottweiler.

There’s every reason that your Rottweiler will come to adore their swimming time with you but be aware that it might take them a while to truly get the hang of it.

Give your Rottweiler plenty of praise when they’re in the water, so they continue to associate swimming with a good time.

Start in shallow water, and then gradually move out a little deeper. You can even put out a couple of treats ahead of your Rottweiler’s nose to encourage them to push out further.

At first, your pup will only want to use their two front paws to swim, as they literally doggy-paddle their way around. For a Rottweiler to truly be able to support their large bulk, they’re going to need to use all four legs.

This is where you come in. Get in the water with your Rottweiler and support them from underneath, holding them up a little so that they begin to kick with all four legs.

Remember to keep giving plenty of praise when they do this, so they know they’re getting the hang of it.

All your dog ever wants is to make you happy, and when they find that swimming is something that they’re rewarded for with praise and treats, they’ll be unstoppable.

Once they’re swimming with all four legs and you’re happy that they’re enjoying themselves, it’s time for you to let them swim alone, without you holding onto the life jacket. Make sure they don’t go out too far by keeping them on the leash.

The leash doesn’t have to be around the dog’s neck, and they don’t even have to know it’s there. Tie it to the life jacket, but keep a firm grip on it yourself, so that your Rottweiler doesn’t get overly enthusiastic and kick out to sea!

Dogs love to hang out with other dogs and as pack animals, they love to watch and learn from one another.

If your Rottweiler’s not seeming too keen on the swimming idea, then it might be that the presence of their human isn’t enough.

Try meeting up with other dog owners, especially other Rottweiler owners, and all heading to the lake together, to see if the company of other, more experienced swimmers will be able to set the example.

Don’t Push Your Rottweiler if They’re Not Loving It

Swimming, like all kinds of exercise, should be fun for your Rottweiler. And sometimes, even the most active, playful dogs just don’t like being near water.

If your Rottweiler’s too scared to swim, then don’t push them. If they’re having a good time splashing in shallow water, and they’re not afraid, then there’s no real need to have them feel forced to learn how to swim.

The most important thing is to introduce your Rottweiler pup to water as early as you can, and this will be the best start they could have in their watery journey. But even if they never really feel the urge to leap off the end of the pier, they’ll still surely love their trips to the lake.