If you asked a roomful of strangers which dog breed has the strongest bite, how many would you think would say Pit Bull?

Topping the most dangerous dog lists and appearing in the media seemingly every week, the Pit Bull Terrier certainly has a terrifying reputation.

“It can lock its jaws like a steel trap and must have the highest bite force of any dog,” says the voice of public opinion. Would it surprise you to learn that a Pit Bull cannot even bite as hard as a German Shepherd?

What Is the Bite Force on a Cane Corso?

Can you believe that the bite force of a Cane Corso is almost three times that of a Pit Bull? At over 700 PSI, the Cane Corso bite force is among the top three in the canine world. The Corso’s combination of skull size and jaw structure gives it tremendous power and grip in its bite.

We briefly discuss the science behind jaw strength estimates and measurements. We then delve into the strongest bites in animals of the world for comparison and perspective. Finally, we discuss how common breeds compare and where the Cane Corso fits in.

Looking at the top-ten list of highest bite forces of dog breeds is interesting. The Cane Corso, or Italian Mastiff, has the third-highest bite force. The following list shows eight representatives.

What you may notice immediately is two of the dogs are not even purebred. The Cane Corso bite force is second only to the Kangal among purebred dogs.

How Does Cane Corso’s Bite Force Compare to Other Animals?

Dogs, even the Cane Corso, cannot measure up to the bite pressure of several wild animals because they do not have the mass or skull size.

For example, comparing a dog to a saltwater crocodile that can reach over 20 feet long and weigh over 2200 pounds would be preposterous.

According to Popular Science, this species has the strongest recorded bite, biting with more pressure than any other creature their size.

How Do You Measure a Dog Bite Force?

Measuring any animal’s bite force is challenging. You can tell a person to bite on an object and sustain it long enough to slide in equipment and take measurements. You cannot do that with a dog, let alone a wild animal.

However, scientists have devised an instrument to measure the bite force in dogs involving transducers. Experts can digitally measure the pressure of dog bites in vivo.

Another method involves hooking electrodes to the upper jaw muscles of anesthetized dogs.

While both models have proven accurate and within five percent of live measurements, the two-dimensional estimate is inaccurate in determining which muscle groups contribute how much force to the bite.

Newton is the force to accelerate a kilogram (2.2 pounds) of mass one meter (1.1 yards) per second. Scientists use the unit Newton to reference bite force. A Newton can be difficult to visualize, so most people who talk about bite force express it in PSI units.

PSI stands for pounds per square inch and is used for many values besides bite force, including water pressure.

However, mathematical errors in a few conversions ended up as overblown bite forces for certain breeds of dogs.

Pit Bulls were a breed that saw their legendary status as bloodthirsty attack dogs skyrocket with claims to a bite force of over 1,000 PSI.

Which Qualities Are Relevant in a Dog’s Bite Force?

The most critical contributing characteristics to a dog’s bite force are the size and width of its skull and motivation.

A dog’s skull tells you the size of the muscles responsible for closing the jaws and their distances from the joint’s axis of rotation. It is easy to visualize if you know the breeds with the strongest bites.

Most dogs in the top 10 highest bite forces belong to the Mastiff family, like this American Bandogge or this Cane Corso.

Note the massive size of the skull in each dog and the prominence of the masseter or cheek muscles.

You can also see from the square shape of the head that the jaw’s center of rotation will be pretty close to the large muscles of the cheeks and temple and the temporomandibular joint (TMJ).

Such dogs can gain a lot of power from the wide breadth of the mouth against the relatively short mandible that acts as a lever.

Large brachycephalic or short-nosed dogs have a stronger bite force than big dogs with standard or long snouts.

However, small brachycephalic dogs tend to have a weaker bite because their small skull size must accommodate other structures, such as the brain. Other features contribute to a dog’s bite force.

A dog’s breed contributes heavily to bite force because of temperament and background.

A dog with a background in guarding property or fighting off predators will bite much harder than a retriever or spaniel of the same size that needs a soft mouth.

Moreover, dogs with a high bite force are often aggressive when they attack. The presumption is their training and breeding will only allow them to attack as a last resort.

Dogs owned by people with ill-intent and attack canids display aggression early and bite with a greater focus on causing extensive damage or even death. Defensive dogs, such as fear biters and protection animals, also tend to have greater biting pressure.

Despite their proficiency as fighting dogs and the dubious honor of being the fatal breed, American Pit Bull Terriers do not have the strongest bite.

A Pit Bull’s biting pressure of 235 PSI is mediocre in the dog world. Compare this to the German Shepherd at 238 PSI and the Doberman at about 245 PSI. They all fall within the canine average bite force of 230 to 250 PSI.

If you took a sample from each AKC group, you might be surprised at the results. 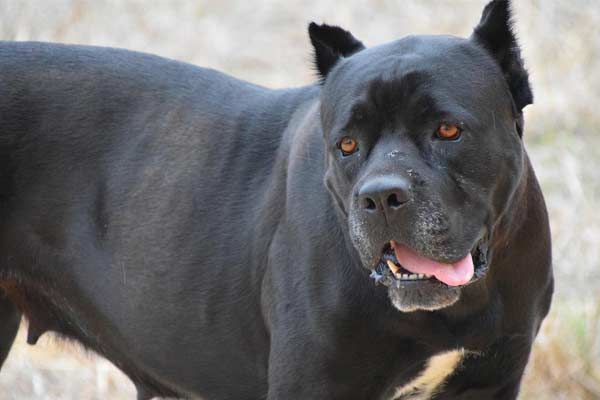 Are Cane Corsos Hypoallergenic? Get the Facts Before You Adopt!”

Cane Corso Price: What You Should Expect to Pay How Fast Can a Cane Corso Run? How Quickly Reach Its Top Speed