Dobermans are as recognizable as they are popular. They have an athletic grace that is unique, resulting in a dog that is neither buff nor marathon thin.

Have you ever seen a Doberman walk? Did you notice the unmistakable and pronounced spring in her step? It seems to beg the question, “How high can a Doberman jump?”

A Doberman can make a vertical leap of about six feet. Of course, this feat depends on several factors. Since a six-foot jump is the upper limits of what most dogs can accomplish, any Doberman that does it must be healthy, mature, and in good physical condition.

The Doberman Pinscher is one breed that can jump so high because it is the right size without any added bulk in its musculature. Moreover, the Doberman has balance with tremendous power in its hindquarters.

What makes a Doberman built for jumping?

Many dogs can jump surprisingly high, but they all share a few qualities. Most high jumping dogs are medium to medium-large, although several small breeds can leap several times their height.

To get off the ground vertically, dogs perform best if they are not oversized. On the flip side, if they are too small, they will not have the power to jump exceptionally high.

Dobermans are usually 24 to 28 inches tall at the shoulders. They weigh 70 to 100 pounds. A Doberman Pinscher is about 40 to 46 inches long from the tip of the nose to the tail.

However, its length from the withers to the rump is about equal to its shoulder height, giving the dog a square shape.

The Doberman’s conformation ensures balance, and its long legs lend a relatively high center of gravity. Thus, when it jumps, a Doberman needs more clearance than other breeds and places more effort in propelling itself higher. With its deep chest, a Doberman requires about two feet to clear a barrier.

Besides its size, the Doberman has a lean and muscular frame that contributes to its ability to jump. Its hind limbs are well-angulated for a powerful launch from a standstill, and the Doberman has the excellent speed to help it gain momentum for running jumps.

A Doberman in top shape can run up to 35 miles per hour. The average Doberman runs between 25 and 30 mph.

Physical condition and age within the breed are the most essential qualities regarding an individual’s ability to jump. A working dog will start with a much higher potential for any athletic endeavor than will a housepet that is only moderately active.

Dobermans who walk and run daily can jump much higher than those who are overweight. Orthopedic issues are significant hindrances to both running and jumping.

Dogs are at the peak of their jumping abilities between 24 and 54 months old. Older dogs cannot jump as high as younger dogs once joint problems occur and muscles lose their elasticity and spring.

Young puppies can barely walk, let alone jump. Adolescents are still building their full muscular and ligament strength. Full muscular development may not be complete until a dog is three years old.

Other critical physical attributes to a dog’s jumping ability are speed, power, and drive. While females are sometimes faster because of their slightly lighter and more streamlined build, it is not usually enough to overcome the male’s explosiveness due to greater muscular bulk and strength.

However, excessive bulk, such as with some Pit Bulls and American Bullies, would not serve a Doberman very well.

A docked tail is a disadvantage many Dobermans have that prevents them from jumping even higher. In countries where tail docking is illegal, this is not an issue.

You can argue that Doberman Pinschers with docked tails have adapted to having a shortened tail. However, a complete tail assists in a jump’s propulsion and landing phase. Even more helpful in running jumps, the tail can provide aerodynamic lift.

How high can a Doberman jump?

There are two ways to measure how high a dog jumps. One assesses how high the dog can jump straight up or vertically. Jumping upwards from a standstill is difficult and requires significant balance and core strength.

You can also measure how high an obstacle a dog can jump on the fly. With the additional momentum from a running start, dogs can jump a bit higher than they would be able to for a straight vertical leap.

It still requires effort because the dog must cover a combination of the height and width of the hurdle. Moreover, an underestimated skill is the ability of a dog to get its body up horizontally over a jump and not hit the barrier with its legs, chest, or belly.

What are the Doberman’s jumping numbers?

The minimum height a Doberman can jump is 24 inches. A well-conditioned, trained Doberman has a standing vertical leap of about six feet. In a full gallop, Dobermans can jump several inches higher (i.e., dock diving).

You can expect your Doberman to be closer to the average jumping prowess for the breed, with a standing vertical jump of four feet and a running leap of close to five feet.

Exceptional working dogs have been known to perform a running vertical jump of just under eight feet. While Dobermans are not the highest jumping dogs, they are certainly in the top 5% to 10%.

What type of fence do you need for a Doberman?

A privacy fence of five to six feet around your yard should be sufficient to keep your Doberman from escaping. This assumes you have provided for the basic needs of your pet.

Privacy fences are ideal for guard dogs for a few reasons.

Well-socialized and properly trained Dobermans tend to respect fences. It helps that they have had generations of breeding to patrol a perimeter. However, they have a high energy level, and a lack of exercise sets them up to become easily overstimulated.

If he receives adequate exercise and mental stimulation, a Doberman’s prey drive is not as high as that of terriers. Therefore, Dobermans are not commonly overwhelmed by the urge to chase something.

Dogs motivated to get over a fence can attempt to climb it and jump it. Dogs like German Shepherds and American Pit Bull Terriers often run at a barrier and use their momentum to scale the last couple of feet.

A German Shepherd performed a record-breaking climb of over 11 feet, although some Pit Bulls are purported to be able to scale 13 feet or more.

If your Dobie is a climber, he may be able to get over an eight-foot fence. Wooden or vinyl fences rather than chain link barriers or brick walls will deter climbing. Coyote rollers are also effective. Your Dobie must be extremely motivated to want to climb over a fence.

This video shows a Doberman combining jumping and scaling techniques to get over a wall. It is unclear how many breeds get credit for this type of activity when calculating the height they can jump.

This is not a pure vertical leap but demonstrates Doberman’s athleticism. It also illustrates that motivation (for the toy) and obedience are this Doberman’s primary drives to attempt to scale the wall in the first place.

How does a Doberman’s jump compare to other breeds?

A dog can typically jump up to three times the length of its legs. Some dogs, like the Bulldog, can barely jump over a few inches. Others, such as the Jack Russell Terrier, defy all odds and jump five times their height.

We will cover only a handful of the most notable jumping breeds as a foil to the Doberman’s abilities.

There are several ways to measure a canid’s vertical jump capabilities.

It is difficult to measure the skills of a Greyhound because the breed is not highly motivated. You can, however, work on its exaggerated prey drive. A Greyhound is 27 to 30 inches tall and weighs 60 to 90 pounds.

Dobermans inherit their jumping abilities from the Greyhound. The Greyhound is one of only two documented breeds (The other was the Manchester Terrier) to play a role in the modern Doberman’s creation.

Whippets are built like Greyhounds but come in a much smaller package. They are 18 to 22 inches tall at the shoulders and typically weigh 20 to 50 pounds. Also built for coursing and jumping, Whippets show the same aptitude for jumping as Greyhounds.

A notable Whippet named Spitfire broke records by leaping eight feet and four inches in dock-diving exercises, much different than clearing a hurdle.

Dock diving can measure either a dog’s vertical or horizontal jump. The dog leaps into the air to grab a decoy in a vertical test. Like pole vaulting for humans, a canine competitor has three attempts to achieve a height.

Australia’s famous herding dog, the Kelpie, is bred to herd sheep with a medium to strong eye. They move among their flock by jumping onto animals’ backs. Therefore, their vertical leaping ability is not surprising.

Although not an official Guinness record holder, a Kelpie reportedly has jumped over nine and a half feet. Again, jumping onto a surface is not the same as flying over an obstacle without touching it. Kelpies are 17 to 20 inches tall and weigh 30 to 45 pounds.

The JRT is among the most impressive jumpers at 10 to 15 inches tall. Reaching over 35 mph, a Jack Russell can also clear 50 inches. Jack Russell Terrier races have become increasingly popular, but the dog also excels at flyball.

Border Collies are medium-sized bundles of intense energy among the most sought-after herding and agility dogs. They reach 18 to 22 inches in height and weigh 25 to 45 pounds.

However, they reach the jumping capabilities of the GSD and Doberman, quickly clearing obstacles just under six feet tall. This ability surpasses their Australian Shepherd relatives, who can clear four feet. 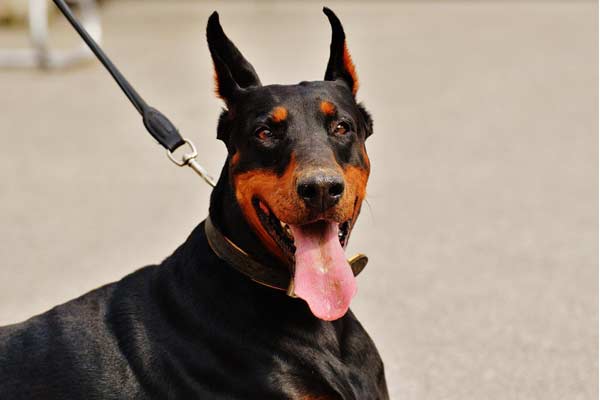 What Size Crate for Doberman Puppy: Length Is Not Everything