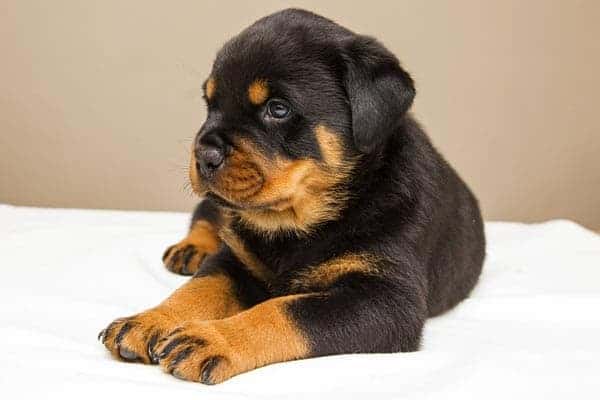 Your chunky little puppy is now putting on weight so rapidly that you’re struggling to pick them up, and they’re eating you out of house and home! So, when will your Rottweiler finally stop growing?

While you’ll notice the most growth between 0 to 8 months, your Rottweiler will continue growing until they’re around 2 years old. If your Rottweiler pup’s a purebred puppy registered with the AKC, then you can ask the breeder for an approximate expected growth weight.

How Big Will My Rottweiler Get?

A Rottweiler is considered a medium-large dog. Males will reach a height of around 27 inches, whereas females will generally be a little smaller at around 24 inches in height.

It’s the bulk and weight of the Rottweiler that really sets it apart from other dogs in the medium-large range: males can weigh as much as 135 pounds, and females as much as 90 pounds. These are average figures, but across pure breeds, you can expect them to be highly accurate.

Even if your Rottweiler seems to have hit the height expectations by the time they’re 8 months of age, they’ll still continue to put on weight as their bones and muscles fully develop.

It’s the same in humans – teenagers go through an incredible growth spurt during puberty, and it seems as though they simply cannot gain weight no matter how much they eat, but over time they will build the muscle density like that of an adult.

Do All Rottweilers Grow to be the Same Height and Build?

Rottweilers are a standard breed, and by that, we mean that you won’t notice huge disparity across the board. Putting twenty different adult Rottweilers from twenty different bloodlines together will show they’re all still around the same average dimensions.

Interestingly, though, there’s a slight but noticeable difference between the American and German Rottweiler bloodlines. American Rottweilers, while still large, powerful animals, are somewhat smaller and lighter than their distant German cousins.

It also makes a difference whether your Rottweiler’s a working dog, a show dog, or simply an active member of the family. Working dogs with very active lives grow to be taller and stronger simply because of the nature of their metabolism and their diet.

It’s always a good idea to get to know the parental line of your puppy, so be sure to always meet up with the breeder when you’re thinking of buying a pedigree dog and asking the right kinds of questions.

By meeting the pup’s parents, you’ll also get an excellent idea of the size your own Rottweiler will reach once fully grown. It’s also handy to know that a male will likely take after his father, and a female her mother. Genetics are fascinating!

What Should You Expect as Your Rottweiler Grows?

Of course, your pup isn’t going to turn from an adorable little chubster to a solid lump of muscly power overnight. It’ll happen quickly, but not that quickly.

Here’s what you should expect once you get your Rottweiler puppy home, as we explain the different stages of Rottweiler growth.

This is the most fun time of having a puppy when your little one comes home for the first time and really settles in. You’ll see that once they’re settled and happy, they’ll begin to put weight on almost before your very eyes.

In just four weeks, your Rottweiler will go from being around 13 pounds to a whopping 33 pounds. And that’s just the females! Males put on weight at the same rate, only they go from an average of 16 pounds to 36 pounds in the same time frame.

By now, your Rottweiler will be much taller than before but won’t be too heavy because right now, all the food they eat is going towards growing their bones. The skeleton is the priority when it comes to growth, and muscle and fat come later.

By now you’ll have noticed that the speed of growth has slowed down a lot, but there will be plenty of other changes going on at the same time, not just to do with height and weight.

That doesn’t mean they’re not getting taller and heavier, though! By the 9-month mark, a female Rottweiler will weigh around 75 pounds and a male around 100 pounds. They still have a little way to go to reach full growth, but they’ll certainly be looking more like an adult.

And a lot of this will have to do with the natural hormonal changes that will have occurred by this age. Rottweiler puberty can begin for males as early as 6 months of age, although females usually have a little bit longer to wait for their first heat cycle, which occurs when they’re around 12 months old.

Their growth plates will have fused, their adult coat will have come in, and they’ll have a full set of adult teeth by the time they’re nine months old. And by this age, you’ll almost never beat your Rottweiler in a game of rope pulling!

Once you’ve had a whole year with your gorgeous Rottweiler, you can expect them to have almost completely stopped growing. At least, they won’t be getting much taller. By now, they’ll have almost reached their maximum height.

You might think they’re still a little slim for a Rottweiler, but this is because it can take another year or two for them to fill out to be the powerhouse of muscle that makes the breed famous.

The Right Kind of Diet is Vital

Reading that obesity affects more than 50 percent of dogs in the US will surely make you want to get the best diet possible for your Rottweiler because it’s so easy for these chunky dogs to gain fat, rather than muscle.

They do very well on a high-quality kibble diet, with portions of around 5 cups per day when they’re around 60 pounds, up to 7 cups when they’re fully grown. When we say high-quality, we mean one that’s made with proteins, and not bulked out by corn.

Around 30% of their diet should be protein, along with a meal that has vitamins, minerals, and other nutrients to keep your Rottweiler in the best of health. Some carbohydrates are needed of course, but too many will lead to them putting on unhealthy amounts of weight.

If In Doubt, See Your Vet!

These dogs are slow growers, but by the time they’ve finished growing, they’ll be the sturdy hunks of solid dogs that we know and love! Rottweiler Wolf Mix: Is This Hybrid Dog Real? Find Out the Truth! Rottweiler Chow Mix: How It Is Not Much of an Enigma