Why Do Rottweilers Eat Their Puppies: the Truth Behind This Distressing Behavior

The image of a mother Rottweiler dog eating her puppies makes any dog owner sick to their stomach. And it is hard even to imagine the level of distress a mother dog would have to be in to resort to this kind of behavior.

Contrary to what a casual internet search may claim, Rottweiler dog mothers do not routinely engage in this kind of behavior. It is extremely rare and can typically be traced to reasons that do make sense, albeit a very strange kind of sense.

Whether you are considering allowing your female Rottweiler dog to breed or you are simply curious to find out the truth behind behavior that you find stressful, this is the article you need to read.

We will also discuss the biological, social, and environmental reasons why a mother Rottweiler dog may bite or eat her puppies.

Why Mother Dogs Sometimes Bite or Eat Their Puppies

The link between the wild wolf and the modern domestic dog may not feel very tangible today. After all, most dogs don’t even look at all like their wolf ancestors!

But, as Sciencing explains, wild wolf pups and domestic dog puppies still have a lot in common.

For example, both sets of young are born blind and deaf. Both are completely dependent on the mama to live.

This is probably why some shared behaviors remain, as PetDT explains.

When the puppies are born, the mama wolf (or dog) has to protect them, find food for them, feed and clean them, rear them, socialize them….the list goes on and on.

So mama wolves don’t have time to coddle sickly or dangerously noisy pups. In times of danger or scarcity, it is not unheard of to see a wild wolf mother kill her pups. Eating is to remove the scent of evidence as a further protective measure.

The technical term for what happens when a mother animal kills their young is “infanticide.”

Many animals have been observed in the wild, killing and even eating their young. But as far as biologists can tell, there is typically a reason mother animals behave this way.

And this practice is not to be confused with the very common practice mother dogs, and mother tigers regularly perform by picking up their pups to move them. This is not considered a “bite,” and the mother animals are usually very gentle when they do this.

Here are some of the reasons biologists offer to perhaps explain this distressing behavior from a mother animal:

1. The mothers are hungry

Hunger can be a powerful motivator. In years of plenty, a mother animal may be able to nurse her helpless young (particularly important in mammals like wolves and dogs).

When faced with survival to perhaps breeding again next year or survival of her existing young, the mother may choose to kill and eat her young to save herself.

2. The young are born sick or there is something wrong with them

In the case of the sloth mother who ate her young shortly after giving birth, the zookeepers later learned that the surviving sloth baby was also very ill. And later, all the adult sloths came down with a virus.

Mother animals seem to sense when a baby is not viable and may eat it to protect others or themselves from wasting precious resources that won’t do any good anyway.

3. The puppies are stillborn

While this may not be immediately apparent to onlookers, a mother dog that perceives her newborn puppies as stillborn may choose to eat them immediately out of a protective instinct.

4. An adult male kills the babies to mate with the mother

Many mature female animals will immediately go into heat again if their young are killed.

Male animals seeking a mate may kill a mother animal’s young to send her back into heat and have the chance to mate and pass on their genes.

Why Do Mother Dogs Sometimes Bite Their Young?

As a mother Rottweiler dog (or any dog) nurses, weans, and pre-socializes her puppies, she may sometimes give a puppy a nip.

Like mother dogs that pick up their puppies by mouth to move them, this is not the same as a bite to injure or kill. We wrote a complete article about rottweiler bite force; click here to read.

For instance, a Rottweiler puppy that doesn’t get the message that dinner hour is over and tries to approach and nurse one too many times may find itself on the receiving end of a sharp warning nip.

When a Mother Rottweiler Rejects Her Puppies: Why Does This Happen?

There is evidence that mother canines may face the risk factor of postpartum depression just like human mothers often do.

As Breeding Business outlines, postpartum depression may occur in dogs just as it does in human mothers.

While research on this topic is hard to come by yet, what is verifiable is that hormone levels change in dogs as in humans. Right after giving birth, a mother dog’s levels of two important hormones, progesterone and prolactin, drop sharply.

At the same time, the mother dog’s stress level increases because she suddenly has a helpless, hungry mouth to feed and care for.

So if a new Rottweiler mom is suddenly showing a loss of interest in or even unexplained aggression towards her newborn puppies, it is worth talking with your veterinarian to see if your dog may need support.

Because depression affects different species differently, the smartest approach is removing puppies from the mother dog. At the very least, 24-hour supervision should be instituted.

How to Protect Newborn Rottweiler Puppies After Whelping

Even experienced dog breeders can experience a lot of stress and anxiety around the time of whelping.

This is not a task you should attempt to tackle solo! There is too much to do and too many unknowns that may go wrong.

Try to arrange for an assistant or a more experienced mentor to be with you during and immediately after the whelping process to keep a constant eye on the puppies and fully support the mother dog.

This is the best way to protect the mother Rottweiler dog and her newborn puppies during and after whelping.

A mother Rottweiler, with adequate support and supervision, is much less likely to try to bite or eat her puppies out of stress, fear, or other factors.

Are Rottweiler Dogs More Likely to Eat Their Puppies Than Other Dog Breeds?

There is no evidence suggesting Rottweilers are more likely to eat their puppies than any other dog breed or species.

This sweet video shows that Rottweilers are incredibly in love with their owners.

As the American Kennel Club (AKC) points out, Rottweilers are the eighth most popular pet dog breed in America – out of nearly 200 breeds!

Whenever a mother animal eats their young, it is always wise to look for the reason. Usually, you will find it. 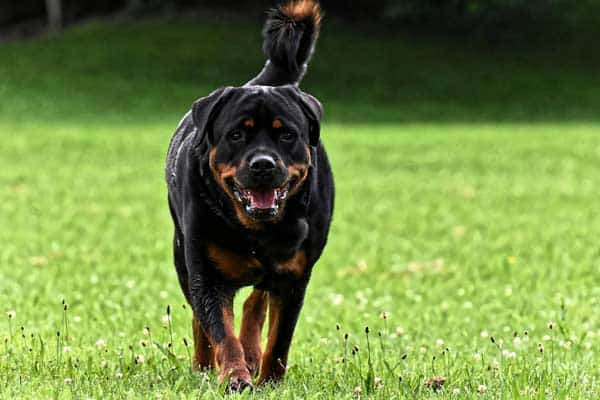